The Battle For Indonesia’s Soul 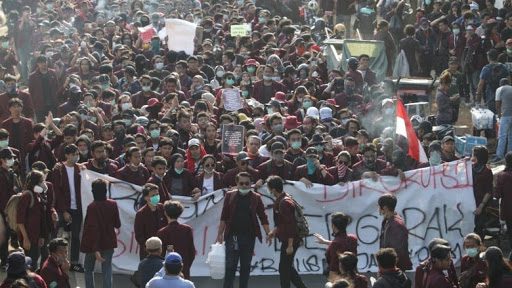 In one of earth’s most populated countries, a typically bustling Asian metropolis is engulfed by passionate conflict between the people and the police. People from all walks of life, especially the young and educated, are fighting back against a law that would greatly expand the power of an authoritarian government which, under the guise of fighting corruption, has increasingly rolled back the civil liberties of its people. The protesters have faced the clubs, attack dogs, tear gas, and, in at least one case, guns of the police, but they refuse to budge from the streets. The government is equally determined not to cave in the face of what it perceives as a  challenge to its authority. The government I’m referring to is not that of China, but Indonesia. Unlike their counterparts in Hong Kong, the Indonesian protesters have received virtually no attention in the Western media in spite of the major implications of the battle they’re fighting.

When Westerners think of Indonesia, we generally think of jungles, orangutans, komodo dragons, and spices. Many would be surprised to hear that it’s the world’s fourth most populous country and, thanks to its abundance of natural resources, including vast amounts of oil, is quickly developing into one of Asia’s great powers. Its most populated island, Java, is home to nearly as many people (140 million) as all of Russia despite being only slightly bigger than Kentucky. Its capital, Jakarta is the world’s second largest metropolitan area and is expected to surpass Tokyo for first place by 2030. This humid, crowded tropical megalopolis, known for its towering skyline, beautiful architecture, noisy bazaars, and streets lined with palm trees, has been practically shut down for the past month. Nearly 200,000 protesters have come from all across the vast and diverse Indonesian archipelago to fight back against the gravest threat to freedom in Indonesia’s twenty years as a democracy. What poses this threat?

Unrest began to mount among the people of Indonesia over the summer of 2019. Exceptionally hot temperatures tortured many in the sweltering towns of a country, located right on the equator. Forest fires broke out in the endangered jungles of Borneo in July, sending a thick haze of smoke across Southeast Asia. The government’s failure to punish the corporations who deliberately ignited the fires in order to make room for palm oil plantations angered many. But it wasn’t until the kids were back in school that people really began to get riled up. On September 5, Indonesia’s parliament passed a sweeping revision to an anti-corruption bill passed in 2002. This bill would, according to most anti- corruption organizations, significantly undermine the power of the Corruption Eradication Commission, or KPK. This infuriated the millions of Indonesians who voted for president Joko Widodo’s reelection last April specifically because of his promise to stamp out corruption and now feel betrayed. It’s not hard to see why people care so much about corruption in a country where the parliament unanimously approved a bill that, according to one poll, 82% of the public is against.

As if it wasn’t in deep enough trouble already, on September 18 the government passed a new criminal code. This bill threatens to turn back the clock decades in terms of civil liberties and adopts strikingly regressive social policies. It would attempt to regulate Indonesians’ sex lives to an unprecedented level: its provisions include outlawing all premarital sex, unmarried couples living together, homosexuality, and abortion except in cases of rape or threat to the mother’s life. It also expands punishment for blasphemy, makes insulting the president, flag, anthem, or Islam a crime. This alarms Indonesians who remember the draconian policies of the dictator Suharto, who ruled with an iron fist from the country’s independence until he was overthrown in 1998. Many are beginning to fear president Widodo, once hailed as a man of the people, has dictatorial ambitions of its own. It’s unsurprising, given this painful history, that the bill has set off such a firestorm, and why the protesters are so determined to keep it from being signed.

This new criminal code is the latest and most notable step in Indonesia’s shift towards religious conservatism. This trend has led to great anxiety among the country’s millions of Christians, Hindus, and Buddhists. Indonesia, the world’s most populous Muslim-majority nation, has long prided itself on being bastion of tolerance. Historically a destination for merchants from all across the world thanks to its central location and lucrative spice resources. Indonesia has a uniquely cosmopolitan heritage, with over 700 spoken languages, and the national language is a hybrid of Javanese, Sundanese, Batak, Madurese, Malay, Chinese, Hindi, Arabic, Portugese, and Dutch. However, there is a fear that Indonesia is forgetting its tolerant roots. In 2017, a Christian governor was jailed for blasphemy. The next year, a jihadist planted bombs in three Christian churches, killing 28. This fear has made religious minorities some of the bill’s most ardent opponents.

Far away from the action in crowded Jakarta, another minority is rising up for a different reason. West Papua, on the far eastern end of the archipelago, is distinct from the rest of Indonesia in many ways. Covered in large part by beautiful sprawling jungles home to biodiversity unlike many other places in the world, the region is considerably poorer and more rural than the rest of Indonesia. Its people are also an anomaly, being more closely related to their neighbors in Papua New Guinea, from whom they were, in a familiar story, separated by arbitrary lines drawn by colonial powers. Despite numbering having less than a million, West Papuans speak over 250 languages and belong to countless tribes. They also have a darker skin tone and more “black” features, such as broad noses and thick lips, compared to other Indonesians, making them a frequent target of racism.

West Papua did not gain independence from the Netherlands until seventeen years after the rest of the country, in 1962. Seven years later, the United Nations forced Indonesia to hold a referendum concerning independence for the region. President Suharto, however, appointed only loyalist delegates to represent the Papuans, ensuring the region remained under his control. Since then, independence activists have waged a guerrilla campaign using West Papua’s mountains and jungles for cover. In its efforts to stamp this out over the past half-century, the Indonesian army has killed over 100,000 people in what some consider an act of genocide. The education system has largely been used as a tool of the government to suppress Papuan language and culture, a story painfully familiar for indigenous peoples around the world. In true colonial fashion, corporations have also long exploited West Papua for its natural resources. The mining firm Freeport-McMoran has turned a mountain considered sacred by the local tribes into a hole visible from space.

The most recent episode in this conflict was a series of protests and riots in December 2018, leaving seventeen dead. Peaceful protests began in August the next year, but soon turned violent once again after the Indonesian police detained 43 students in a dormitory, calling them “monkeys” and “pigs”. The people of Surabaya, West Papua’s largest city, began rioting, storming police precincts, attacking officers, and burning stores owned by non-Papuans. They threw rocks and spears at the police, and the police responded with tear gas, beatings, and occasionally bullets. So far thirty-three civilians and two police officers have been killed. The Indonesian government has cut off the region’s internet access entirely, and the army is now cracking down on opposition in the countryside, having forced over 35,000 from their homes on the grounds that they might be sheltering guerrillas.

The protesters in Jakarta are not, as Widodo’s government would like you to believe, just a mob of horny teenagers angry that their sex is being taken away. Rather, they are a broad coalition, organized not just by the student bodies of countless universities and high schools, but also by mosques, churches, temples, women’s advocacy groups, LGBT+ groups, environmentalists, and labor unions. The protesters are responding not only to the crackdown on civil liberties, but also to the increasing government deference to Indonesia’s corporate elite. Over the past decades, several large Western corporations have moved their factories from the old industrial towns of their home countries to Indonesia due to the lower taxes and regulations. This has created significant economic growth, but many of these factories are notorious for being sweatshops and employing young children for low wages. Labor has scored many significant victories over the past decade, but recently the government has been rolling back protections and benefits for workers. Many protesters are also outraged at the failure to hold accountable corporations responsible for the destruction of rain forests in Borneo and Sumatra, and the fact that a new law is being considered that would allow companies to extract minerals from protected areas.

Over 300 people have been injured, mostly protesters at the hands of police. Other recent protests, particularly, say the protesters, those coming from a more Islamist angle, were rarely met with tear gas or attack dogs. The protesters, for their part, are hardly saints. Countless bystanders report having been violently chased and attacked by them. They are not immune to fighting back against the police with violence of their own, often hurling rocks and petrol gas at them. And it appears that the surprising use of violence by law enforcement, as well as simple fatigue, has taken its toll. A good chunk of the protesters have gone home, but many say they simply have too much at stake and have come too far already to give up.

President Widodo was sworn in for his new term on October 20 before a crowd of faithful supporters, with the mass of protesters just a few blocks away. He faces the daunting task of reconciling a deeply divided nation. Caving to the protesters’ demands would be a humiliation and alienate many of Widodo’s Islamist supporters. Not caving would subject him to international scrutiny and keep the people angry. To be sure, a large but quiet portion of Indonesians, especially older ones, supports the new laws and views the protesters as nothing more than bratty, degenerate teens making impossible demands. At the moment it does seem like the protests seem to be losing steam. But it was a similar crowd of determined activists who brought down Suharto’s dictatorship twenty years ago. Will president Widodo suffer the same fate? No one can be sure, but given Indonesia’s probable status as a great power in the 21st century, we should all be paying close attention to the fate of the archipelago and its 261 million inhabitants.