For fifty years now, the precedent set by Roe v. Wade has guaranteed women across America the right to an abortion within the first 23 weeks of pregnancy. Now, the Supreme Court is deliberating on the possibility of overturning this controversial decision. The current case, Dobbs v. Jackson Women’s Health Organization, will determine the future of women’s reproductive rights throughout the nation.

In 2018, the Mississippi legislature passed the Gestational Age Act, which bans abortion after 15 weeks of pregnancy. The law leaves exceptions only in the case of a medical emergency. Following a challenge of the act’s constitutionality by the Jackson Women’s Health Organization, Mississippi’s only abortion clinic, the law was blocked by a federal district court. This decision was upheld by the Circuit Court of Appeals and was passed on to the Supreme Court, at the request of Mississippi leaders. 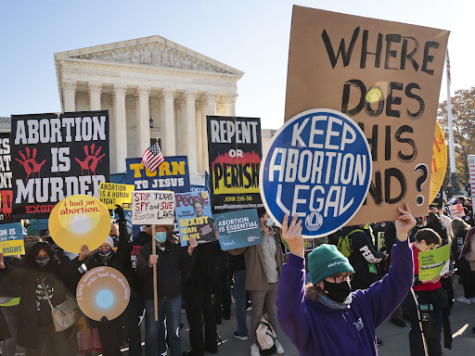 The Mississippi law challenges the court’s landmark decision in Roe v. Wade in 1973, in which they set the precedent for the fetal viability line as the limit for abortions. The viability line is when a fetus is capable of surviving outside of the mother’s womb, generally considered to be about 23 weeks into pregnancy.

After President Trump’s three appointees to the Supreme Court, Neil Gorsuch, Brett Kavanaugh, and Amy Coney Barrett, the court has a conservative majority of 6-3. This increases the likelihood that the Mississippi law will be upheld and even that Roe v. Wade will be overruled.

Mississippi officials, as well as multiple conservative justices, have voiced opinions for upholding the law. First, Chief Justice John Roberts and Justice Samuel Alito have suggested that the viability line may be an arbitrary point for abortion restrictions. Justice Roberts argued that fetal viability has nothing to do with women’s choice and expressed the belief that 15 weeks is adequate time for a woman to make the choice to get an abortion. Justice Roberts also cited similar abortion limits in other countries, to which Julie Rikelman, lawyer for the Jackson Women’s Health Organization, countered that those countries have significant exceptions to their abortion laws. Finally, Justice Brett Kavanaugh described several prior Supreme Court cases, including Brown v. Board of Education, which prohibited racial segregation in the school system, and Obergefell v. Hodges, which legalized same-sex marriage. He argued, using these cases as examples, that precedent had been changed before and could be again.

The Jackson Women’s Health Organization and their supporters, on the other hand, have expressed several grave concerns about the Mississippi law. First, about 100 patients per year in Mississippi get abortions from the clinic after the 15 week mark. So while proponents of the law may claim women have plenty of time to choose, in reality only a minority of women are aware of their pregnancy and able to make this decision at this time. Second, according to abortion rights activists, the decision to uphold the law could allow states to outlaw abortion entirely. Third, liberal Justice Sonia Sotomayer said that 15 justices have reaffirmed the current abortion limit since Roe v. Wade, while only 4 have disagreed with it. Finally, Justice Stephen Breyer, who is also liberal, has expressed concerns about the effect overturning Roe v. Wade would have on the court’s reputation. He said, “To overrule under fire in the absence of the most compelling reason to re-examine a watershed decision would subvert the court’s legitimacy beyond any serious question.” Justice Sotomayer echoed these concerns, suggesting it would make the court seem like a political institution.

The Mississippi law has also received criticism from other key figures in our government, including President Biden. Biden said that the Mississippi law “blatantly violates” a woman’s fundamental right to an abortion and that he is determined to garuntee that right through federal law. Similarly, the U.S. Solicitor General Elizabeth Prelogar sated that law would mean an “unprecedented contraction of individual rights.”

Currently, the justices are divided on how to settle this case. The liberal justices, Sotomayer, Breyer, and Elena Kagan, are likely to vote to find the Mississippi law unconstitutional. The three farthest right justices, Alito, Gorsuch, and Clarence Thomas are likely to vote to overturn Roe v. Wade. Chief Justice Roberts has expressed the intention to vote to uphold the law, but not to overrule Roe v. Wade. The other justices remain undecided. The future of women’s rights rests on their decision, and whatever they decide, the effects will reverberate through the lives of millions of women across America.